INCREDIBLE BUT FACT: A 3D PRINTED SKIN OF A DINOSAIR IN A MUSEUM! 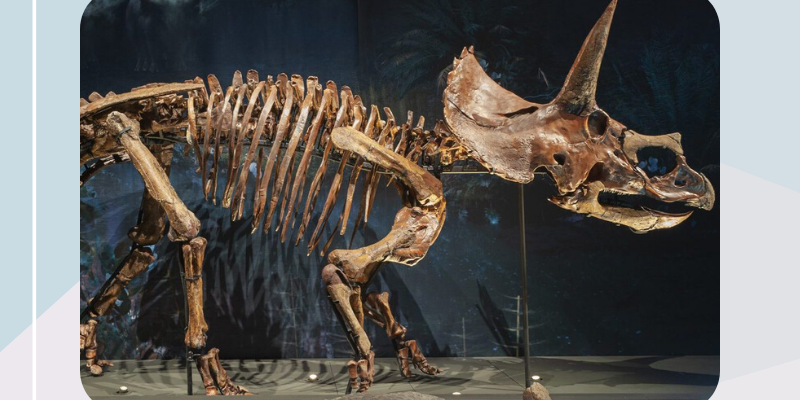 After months of scanning, 3D printing, mounting original bones and 3D prints, Dirk is proudly on display at the dinosaur gallery of Naturalis.

Naturalis Biodiversity Center, located in Leiden the Netherlands, is the national research institute for biodiversity and responsible for one of the biggest natural history collections in the world, counting over 42 million different objects. This includes a 66 million year old T. rex skeleton which was discovered in 2013 in Montana US, and other dinosaurs such as a Triceratops nicknamed Dirk. After a construction period of 2 years, Naturalis has opened the doors to a completely new museum.

The skeleton of Dirk was dug up near Newcastle, Wyoming, US. The animal lived about 67 million years ago. When working on the skeleton it became clear that some bones were missing, including a number of ribs, one of the horns and a large part of the skull. Naturalis wanted to reconstruct the skeleton of Dirk to put on display it in their newly opened museum. With modern technology such as 3D scanning and large scale 3D printing, they were able to complete the skeleton of Dirk.

Dr. Peter H. Schalk, Director of Public and Markets at Naturalis explains: “Modern day palaeontologists use 3D imaging and printing techniques as an instrument to reconstruct fossil remains that are discovered in scientific excavations. An industrial Builder Extreme 3D printer is deployed in the LiveScience gallery of the new Naturalis museum as an ongoing demonstration to the public how missing parts are printed and fitted in dinosaur skeletons.”

Naturalis is no stranger to 3D printing. The museum has been using this technology for a couple of years now, but so far only on small scale, with small 3D printers. “This works perfectly fine if you only need 3D prints of a handful of smaller bones”, says palaeontologist prof. Anne Schulp, researcher at Naturalis, “…and for a single larger bone, combining a couple of smaller prints isn’t too much of a hassle.

3D Printed Skeleton of a Dinosaur in a Museum with Builder Extreme!

Before the scientists could start 3D printing, they needed to scan the bones of other Triceratopses to be able to complete the skeleton of Dirk. “If we have, for example, a left bone and the right-side counterpart is missing, we can easily make a scan and a mirrored 3D print,” Schulp explains. “For some other bone elements, particularly the vertebrae, we were welcome to use a scan of a Triceratops skeleton in the collections of the Children’s Museum in Indianapolis. Their Triceratops skeleton is very much complementary to what we found of Dirk.” After processing the scans, the 3D printing process started. The Builder Extreme has been printing 24/7 for the last couple of months and printed a hundred different elements. Some of the bones found, were simply too fragile to put on display so they were scanned and printed as well. The ribs of Dirk for example, were not all sufficiently well-preserved to allow mounting in the skeleton, and some were even missing, so they have all been 3D printed.

For Naturalis it was really important that every little detail of the bone was visible in the 3D printed part so they have been 3D printing the parts in the highest quality possible. Some of the bones have a complex shape and needed to be printed with support structure. After printing, the support was removed and the bones were painted by hand by Remmert Schouten from Nichecraft. Because the bones show every little detail and look like real bones, Naturalis has chosen to paint the bones in a slightly lighter colour than the actual bones so visitors can tell the difference.

Although Dirk has just been completed, the Builder Extreme 1500 PRO is already fully booked for another big project Naturalis is working on. The Builder Extreme 3D printer is displayed in LiveScience gallery of the new Naturalis museum as an ongoing demonstration to the public how missing parts are printed and fitted in dinosaur skeletons.

If you want to see the printer itself, thanks to which Dirk has been restored, you can also see it in Bulgaria at the 3DBGPrint showroom – Official Builder representatives for Bulgaria. You will also be able to see in the 3DBGPrint live demo showcase how Builder Extreme 1500 PRO really works, touch the magic of 3D printing and even order a free sample. Don’t hesitate – visit 3DBGPrint!