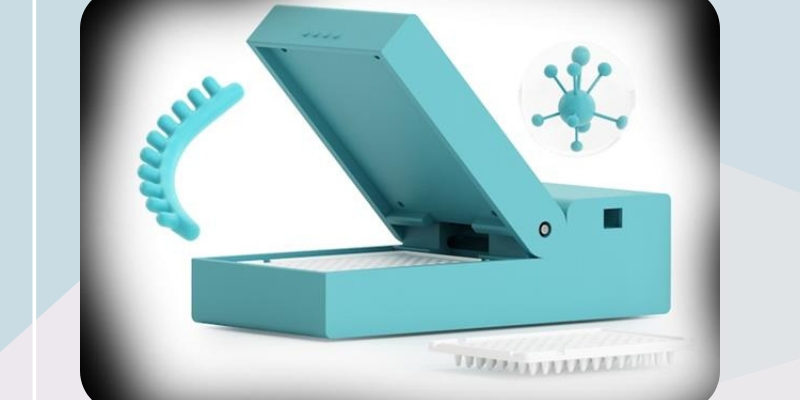 Cancer seems to become more and more prevalent in the modern world, and few people have not lost a loved one or family member to the disease. Fortunately medical researchers are fighting back hard, and even 3D printing technology has a role to play. For medical startup Miroculus has been working on a very precise 3D printed blood test device called the Miriam, which can detect early stage cancer using nothing more than a small blood sample. And as cancer is best fought as early as possible, this kind of accessible diagnostics tool could become a real life saver.

The team from Miroculus is all too aware of the dangers of cancer, and has been working for years to present a cost-effective solution for early-stage cancer detection. “Having lost loved ones to cancer greatly contributed in the decision to try and tackle this problem,” CEO Alejandro Tocigl revealed. The startup itself was founded in 2013, through Singularity University’s Global Solutions Program. An early 3D printed version (then simply called the ‘Miroculus’) showcased back in 2014.

While the 2014 Miroculus prototype already showed promise, the Miriam is growing into something much more potent. “[It enables] user intervention and automates the complete test from sample loading to test results reporting. The core technology is digital microfluidics and a proprietary microRNA detection method packaged in an affordable instrument with disposable cartridges,” Tocigl explained in an interview. “The goal of Miroculus remains the same: a simple blood test to detect disease at the molecular level.”

As Tocigl revealed, they have been heavily building on their technology since 2014, and are using digital microfluidics principles to turn the Miriam into a ‘lab on a chip’. Their first target is gastric or stomach cancer, and they recently worked with the National Institute of Health on a multi-center clinical study in three countries with 650 patients – with the goal of identifying stomach cancer microRNA signatures.

For those microRNA signatures could play a huge role in cancer detection, as they can serve as biomarkers in patients. Other studies in ovarian and lung cancer have already showed results in this field, and Miroculus already built the open source AI tool Loom to analyze these microRNA signatures. “We hope to see Loom guiding researchers and clinicians around the globe through the microRNA knowledge database,” Tocigl explained. While not all specialists believe that cancer can be detected at a molecular level through a blood test, the 3D printed Miriam device could prove them wrong.

What’s more, this focus on gastric cancer provides them with a very clear goal, while simultaneously giving doctors everywhere a tool to fight one of the most prevalent cancers in the world. Right now, the cancer is especially prevalent in the developing world, where affordable healthcare is almost non-existent. That’s quite ironic, because early detection could greatly increase a patient’s survival chances. The Miriam could enable doctors to systematically divide patients into groups in need for further diagnostics, while limiting access to the expensive endoscopies (which are currently used for detection) to those patients already testing positive through the Miriam. “This would result in significant health cost savings and enable much faster and more affordable testing than the current system. We are currently establishing relationships with regulatory bodies and hospitals to be on the market in 2018. After our first test hits the market, we’ll expand into other types of cancers and other conditions,” the CEO explains.

But none of this would be possible without Loom.bio, which is in some ways comparable to the IBM Watson. “Loom is an up-to-date snapshot of the microRNA literature landscape we built to expedite our own research. Loom is a service that not only lists but also weighs the relationship between microRNAs, genes, and diseases based on all scientific literature available in PubMed and PMC,” Tocigl says.

But most importantly, the same principles can be applied to a lot more diseases. “The Loom dataset is one of the inputs to our machine learning models to identify relevant microRNAs in a disease of interest, and we are making it accessible and open because we believe it may prove valuable in accelerating research efforts in the microRNA space,” the CEO says, who added that these kinds of tools can propel the diagnostics field to new heights.

At the same time, however, the Miriam approach is sometimes criticized for relying so strongly on microRNA diagnostics – which still needs to be validated for this purpose. But Miroculus is also part of a new generation of microRNA diagnostic kits that show very promising results. They therefore believe that the 3D printed Miriam can help validate the entire diagnostics model. “Although the field is still young, we have seen increasing research and clinical validation studies showing very promising results. We expect to see in the near future at least five to ten new diagnostic tests based on microRNAs, not only for cancer detection but also for other conditions,” Tocigl argues. Could this be the tool that can normalize early cancer detection?