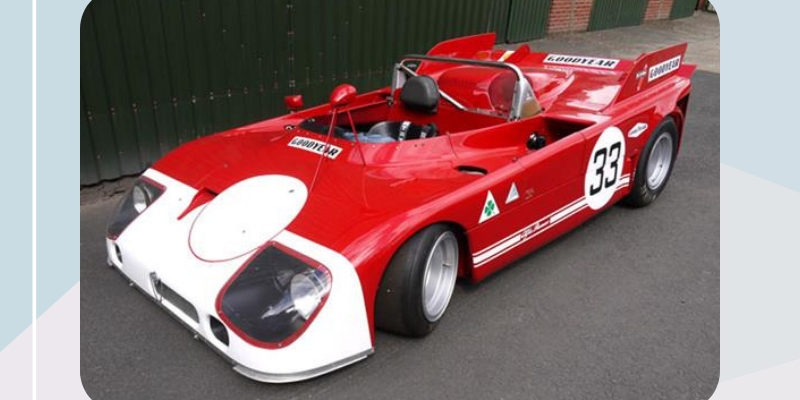 Alfa Romeo Tipo 33/3 is a racecar built in the late 1960s which packed a 400 hp 2998 cc V8 engine. For the engineering specialists at KWSP, however, restoration of one of the vintage Italian racers was achieved in lightning-fast time thanks to 3D scanning and 3D printing technology.

The Alfa Romeo Tipo 33/3 made its racing debut in 1969 at the 12 Hours of Sebring in Florida. Despite performing badly in that race, the car eventually found success in the 1971 with Rolf Stommelen and Nanni Galli winning their class at Sebring and the 1000km Buenos Aires. Before that, the car even featured in Le Mans, a 1971 racing movie starring Steve McQueen. Few 33/3s now remain, but one survivor is owned by British vintage car restoration specialist Martin Stretton Racing. Badly damaged parts had kept Stretton’s Tipo off the racing circuit for several seasons, but engineering business KWSP has used 3D scanning and 3D printing to get the iconic vehicle back in action.

Despite the Tipo’s original V8 engine aging gracefully, problems with its front cover eventually prevented the vehicle from starting. Worryingly, the vehicle’s rarity meant that finding a replacement was as difficult as taking a sharp corner in Monaco. Stretton considered approaching skilled model makers, but soon found that their services would be prohibitively expensive. KWSP, on the other hand, informed Stretton that by 3D scanning the original engine and cover, and by using 3D printed prototypes, an accurate recreation of the part could be made at a reasonable price.

“Touring the KWSP facility was a real eye-opener for me,” Stretton told The Manufacturer. “It showed what could be done with skilled engineers using additive manufacturing. Components, body panels and complete structures can now be scanned, digitized, designed for manufacture and made within days using this approach. Previously, much of this wouldn’t have been possible. And if it was, it could have taken months.”

The front cover of the Tipo’s engine, which had originally been cast in lightweight magnesium alloy, was badly damaged, sporting several cracks and a number of unsightly welds. The only option for Stretton and KWSP was to reverse engineer the part, as well as the original water pump and housing, by putting it under a 3D scanner. Due to the damage sustained by the engine cover, however, the scanned 3D model would be insufficient—those cracks and welds would have to be fixed digitally using CAD software.

“This is where the real value of our consultancy comes in,” said Stuart Banyard, head of advanced manufacturing at KWSP. “We were able to create a digital scan of the part—and then crucially, make vital changes to the design to bring it back to its original geometry and functionality. Intelligent use of CAD data allowed us to use the scanned part as a reference, enhancing structural elements as required to recreate the component into its intended form. This part of the process requires a lot of decision making from our design team, examining draft angles and other integral geometries of the CAD.”

Once the engine cover had been successfully recreated using the CAD software, KWSP used a 3D printer to create a PC-ABS prototype of the new part. While this print would have fared badly on the fired-up engine, it provided proof that the soon-to-be-cast part would fit  snugly. Finding no problems with the prototype, the team was able to continue to the casting process, through which the final cover would be made.

Although the original engine cover was made from magnesium alloy, KWSP cast the replacement part in aluminum in order to provide corrosion resistance. The part has now been fitted, and the rare Tipo is back where it belongs: on the road. “Without additive manufacturing, it would have been a lot more difficult to put this great Alfa on the road again,” Stretton commented. “Of course, there are alternatives, but they would have been more than three times more costly—and less accurate.”

After casting five copies of the new cover, Stretton will now be able to quickly replace the part if it should become defective again. Moreover, keeping the digital CAD file handy will allow the car restoration company to create unlimited new copies. The entire process has shown that additive manufacturing and 3D scanning technology can be a viable and cost-effective solution for those in different areas of the automotive sector.